So normally I don’t write tips on productivity, but lately I have been focusing more and more on workflow and I decided to start diving deeper into things like Brett Terpstra’s nvALT, Smile’s TextExpander, and Second Gear’s Elements (ala Mac Power Users, Back to Work and Merlin Mann). This means you may see so more stuff from me regarding cool tools like these.

But this is a quick tip. So here it is:

When I installed nvALT there were two pieces that threw me right away. First, even after going into the preferences and changing “Read notes from folder” to the folder that had all my Markdown notes it didn’t register any of them in the search. The reason? I needed to change the “Store and read notes on disk as” drop down from “Single Database” to “Plain Text Files” and then I needed to add the file extension “md” to the “Recognize individual files with attributes:” extensions. Check out the screen capture below if this isn’t quite making sense. (Also note that there is a “+” in that preference window, next to the “-” symbol, but it isn’t showing right now in Lion.1) 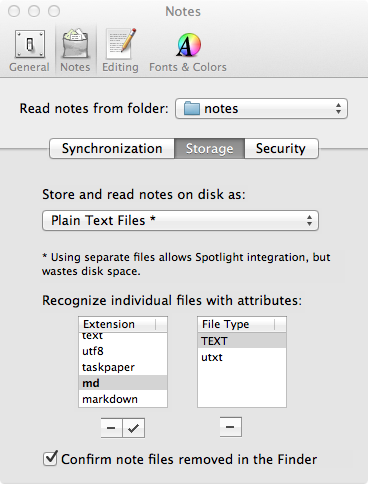 The second item that started to bug me was that any new note/file that I created was being created with the .txt extension instead of the .md extension that I work in all the time now. Frankly, if I couldn’t fix this issue, I would have probably abandoned nvALT almost right away. Fortunately, I found that by selecting “md” in the “Recognize individual files with attributes:” list and then hitting the check mark, it bolded it and my tests have showed that all my new files being made by nvALT are now .md files.

With these two items out of the way I plan to seriously play with this system.

If, by some freakish chance Brett Terpstra checks out this post, one feature request that I would make right now is to allow for the use of his Marked app for the preview instead of only having the built in, but excellent, nvALT HTML preview. There’s a good chance that it is already a feature and I’m not aware of it. I’m loving Marked, and if you’re a Markdown person and not using it yet, you should definitely check it out.

I originally posted this on my Tumblr The Face of Geoff